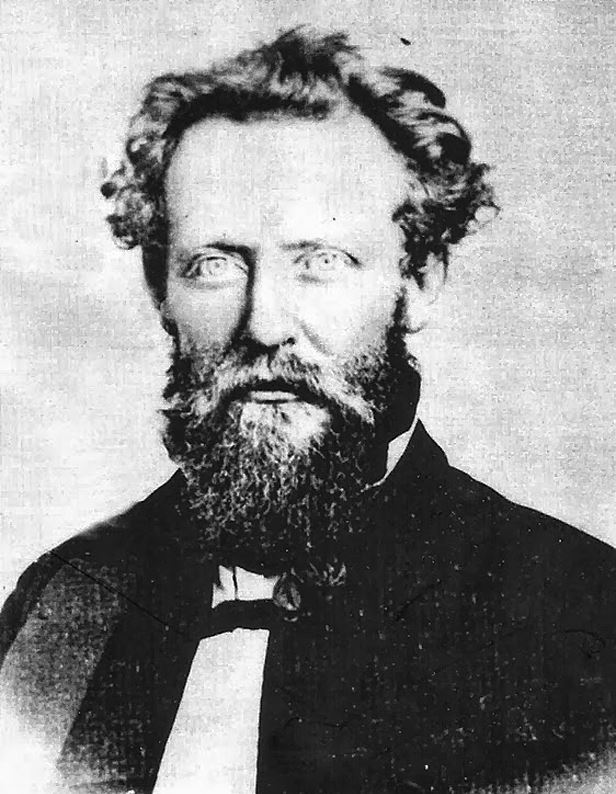 Charles Bludworth was born in March of 1830 in Natchitoches Parish, Louisiana. Coming west to California he was recruited by Captain Harry Love to join the company of California Rangers, raised in 1853, to curtail the activities of Mexican bandits in the new state.  The most infamous of this group being the legendary Joaquin Murrietta.  Having been part of that successful campaign, Bludworth settled in the Merced River area near Snelling.  Now a fixture in local politics, he was appointed to a committee that sought to make a separate county from Mariposa County (two future sheriffs, Turner and Rector, were also on this committee).  On April 19, 1855, Merced County was formed by the California Legislature and Bludworth became one of the Commissioners charged with establishing an election and naming of civil officers.  Election day was the second Monday in May and Bludworth was elected the first Sheriff.  While in office he married Francis White, daughter of one of the original Snellings, an influential family in the region.

No records detailing Bludworth’s two-year term can be located; however, after his term as Sheriff, he became involved in a deadly feud that both paralleled and preceded the events at the O.K. Corral some 20 years later.  It is unknown if that event inspired or merely emphasized Bludworth’s nickname of “Bloodthirsty Charlie”.  Bludworth remained in Merced County until his death on December 6, 1869.  Sheriff Bludworth is buried in a family plot northwest of the intersection of Merced Falls Road and La Grange Road.  His wife died on April 1, 1876, and is also buried there.  The headstones can be seen from La Grange Road.

If we allowed ourselves a few moments of contemplation, it probably wouldn’t be difficult for us to appreciate the controversy that surrounded the proposal to separate a new county, Merced, from a then massive Mariposa county during the winter of 1855.

The great state of California was only five years old, the gold rush was in full swing, and it’s doubtful that few, if any, suspected that in six short years, Americans would be involved in their bloodiest war ever. At the time, Mariposa County accounted for one-sixth of California’s total area and was the state’s sixth most populous county.  More importantly, perhaps, is the fact that the southern end of the 120 mile long “mother lode” was situated here. However, the portion of the valley floor west of the gold-rich mountains and rolling foothills, that would ultimately become Merced County, held its own treasures every bit as valuable as the Sierra’s ore. The mid-section of the San Joaquin Valley teemed with wildlife and was supplied with water by two well-established rivers – the Merced and the San Joaquin.  Fish and game animals like elk, antelope and grizzly, were plentiful.  Large herds of wild horses made the valley floor their home and grains and vegetables grew readily in the fertile soil.

On April 19, 1855, Governor John Bigler signed an act creating California’s newest county – 1,960 square mile Merced.  (It’s worthwhile to note that all or part of 11 California counties would ultimately be separated from Mariposa County.) The infant county’s first sheriff was a man whose one and one half year tenure is shrouded in mystery, but whose life before and after his term as sheriff, is documented in detail.

Charles Francis Bludworth was born in March of 1830 in Natchitoches Parish, Louisiana.  Twenty-three years later, Bludworth found himself in California, where, perhaps satisfying a young man’s thirst for adventure, he came into the service of the public for the first time.

In the spring of 1853, Governor Bigler was under a considerable amount of pressure from his constituents to deal with a rogue gang of Mexican bandits who were terrorizing Chinese and Mexican laborers along the mother lode and south to Los Angeles. The leader of these outlaws was known, generically, as Joaquin Murietta (more likely these crimes were committed by more than one gang and blamed arbitrarily on the “phantom” Joaquin).

On May 17, 1853, Governor Bigler signed an act authorizing the raising of a company of 20 mounted rangers under the command of Captain Harry Love, a professional bounty hunter and veteran of the Mexican-American War.  It would be the duty of these rangers “to deliver Joaquin Murietta and his bandits safely to the county authorities for trial.” 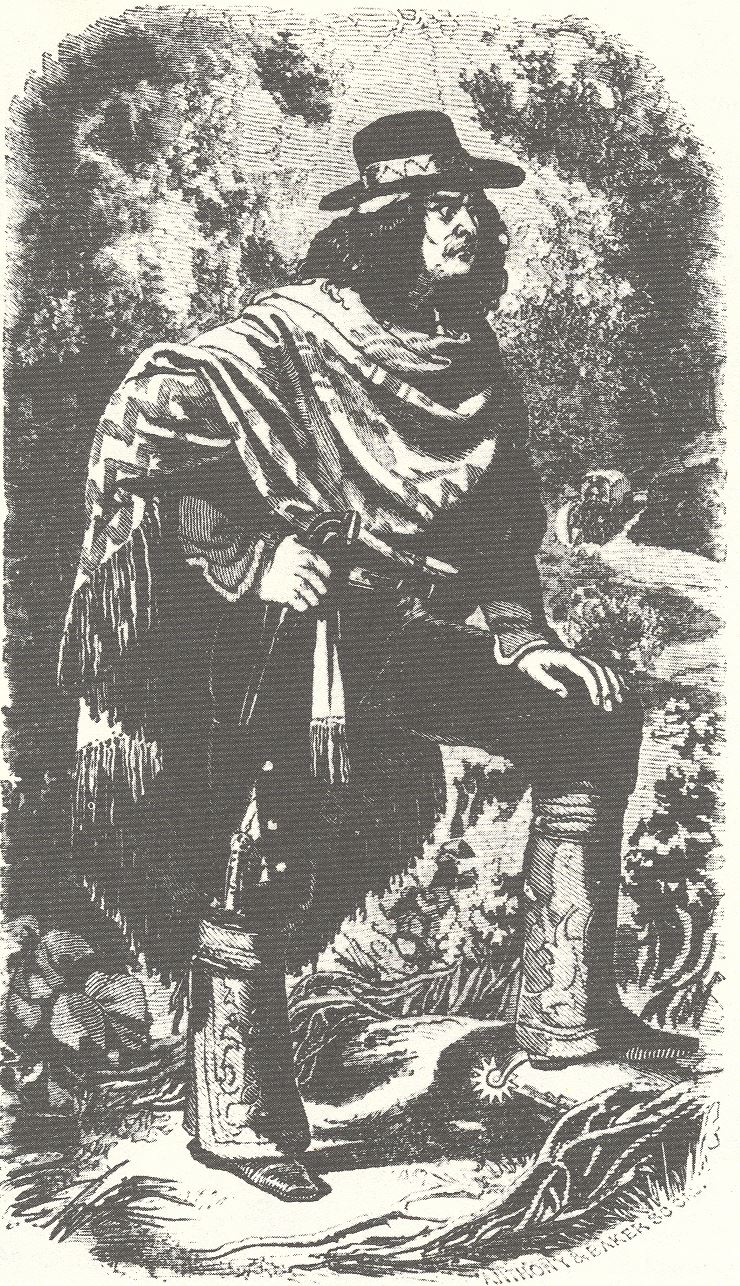 The rangers signed on for a three-month obligation and agreed to supply their own horses, equipment, and provisions.  In exchange for their service, each ranger would receive $150 per month, a small fortune indeed for the privilege of bringing one of the West’s most feared desperados to justice.  A member of Captain Love’s staff was 23-year-old 2nd Lieutenant Charles F. Bludworth.  On a contemporary muster roll, dated May 28, 1853, Bludworth is described as 5-11 with blue eyes and light-colored hair. A little more than two months later, on July 25, Bludworth would secure a place in California’s colorful history.

The rangers had invested a month in the search for Joaquin and, during the first part of July, began following a cold trail.  They rode hard to make up for lost time.  In just three days, they rode nearly 100 miles, crossing the San Joaquin Valley and the coastal mountain range through Pacheco Pass. On July 12, in the Mexican community of San Juan (known today as San Juan Bautista), the rangers enlisted the service of a man identified as Jesus, whom they believed to be Murietta’s brother-in-law. As their search of the coastal mountain range stretched on, the men became increasingly frustrated and restless.  Finally, on July 20, the rangers came upon 70 Mexicans tending several hundred head of horses at the edge of the valley in a canyon called Arroyo Cantua. The Mexicans identified themselves as mustang hunters and the rangers seized seven or eight horses bearing a Spanish brand.  If the rangers had identified Murietta at the time, they never reported it.  To attempt to take anyone into custody at that moment, considering the Mexicans’ superior numbers, would have been “tactically unsound” to say the least.

Nevertheless, intending to conceal themselves and survey the mustang hunters, the rangers withdrew several miles and set up camp.  When they returned, they discovered the Mexicans and their herd of horses had quietly slipped away. The next morning, Love’s men, noticing the smoke from a distant fire, rode into the camp of six or eight Mexican cowboys.  Apparently, no records exist that would indicate whether these men had been a part of the larger party contacted several days earlier by the rangers. As the rangers approached, the Mexicans scrambled through their camp, apparently trying to make their way to their horses and guns.  The rangers’ superior numbers had the Mexicans at a disadvantage and they chose not to resist. A tense standoff followed and Love began questioning the men.  One of the caballeros interpreted. Another ranger, 1st Lieutenant Bill Byrnes, rode up and identified one of the Mexicans as Murietta.  The Mexicans scattered and a gun battle began.  A three-fingerd man, later claimed by the rangers to be Murietta’s Lieutenant, Three Fingered Jack, fired two shots at Captain Love, one of which passed through his hair. Four rangers, including Bludworth, turned their attention toward this man and fired nine bullets into his body, killing him on the spot.  Bludworth, for right or wrong, had officially become part of California’s history.

The man identified as Murietta attempted a daring escape that was foiled when his horse was shot from underneath him.  Its rider literally ran for his life, but was shot and killed by the furious rangers. The legend of Joaquin, by no means, ended with the death of the Mexicans at Cantua Creek, but Charles Bludworth’s obligation to California’s mounted rangers did.

Just two years later, Bludworth would become Sheriff Bludworth.  His term as Merced County’s first lawman must have been unremarkable for little, if any, documentation exists regarding the sheriff’s official activity.

On Saturday, 23d inst., the most terrible affray took place in the town of Snelling, the county seat of Merced County, that has ever happened within our knowledge.  About noon, on the above named day, Stevens, Bartley and Wilcox went to Snelling and, proceeding to the neighborhood of the courthouse, made fast their horses, and entered the Sheriff’s office, where the Sheriff and two other persons were seated.  They had with them two double-barreled shotguns, which they laid aside and sat down.  Shortly after they were seated, Charles F. Bludworth, late Sheriff of Merced, entered the office and spoke to Stevens, his remarks having reference to a threat said to have been made by Stevens against his life, when firing commenced between the parties, which resulted in the almost immediate death of Stevens.  Bartley and Wilcox retreated to the door, where they met Dr. J. W. Goodin and Benjamin W. White, when a number of shots were fired, Goodin and Bartley being mortally wounded.  Wilcox made his escape.  Bludworth and White were uninjured and immediately gave themselves into the custody of the Sheriff, and, on examination before Justice Webster, were each held to bail in the sum of $2,000.

Stevens and Bartley died almost immediately; Dr. Goodin lived about four hours.  On examination of the bodies, it was found that Bartley had received seven wounds, Goodin four and Stevens three.

It is said that about 40 shots were fired during the melee and that only about three minutes elapsed between the first and last shots.  Bartley and Stevens were buried on Sunday evening.  Dr. Goodin was buried on Monday, his funeral being attended by a large number of the Masonic fraternity, of which he was a member, and many personal friends.

The following particulars of the immediate cause of the affair we take from an account furnished us by a friend who was present at the trial on Monday last: For some time past, and particularly since the recent lamentable affair in the town of Snelling, in Merced County, resulting in the death of Wm. Snelling, by Wm. Edwards, there has been a bitter enmity between the friends of both parties.  Prominent among Snelling’s friends, also a family connection, is Chas. F. Bludworth, above spoken of, whose life has been several times threatened by the friends of Edwards, among whom were Stevens, Bartley and Wilcox.  Bludworth was warned of this danger, and prudently avoided an encounter until last Saturday when, hearing those men had come to town, armed and reiterating their threats against him, and finding a meeting inevitable, proceeded to the Courthouse, where the affray took place, as stated above.

On a further examination before Justice Webster on Monday, Bludworth and White were discharged.

The Mariposa Democrat editor added this:

Strange as it may appear, among a people surrounded by civilizing influences by which we should be taught better things, the origin of the difficulty which has thus far resulted in the death of four men, and the bereavement of two families of their protectors, was caused by a disagreement over a trifling game of chance, in which the stake was .25 cents.  Some time ago, two men, West and Edwards, were playing “crack loo.”  A dispute arose and a scuffle took place between the parties.  During the scuffle, some of the bystanders interfered and were accused of foul play.  Defiant and aggravating words passed and the bitter feelings than engendered have been exhibited whenever the parties have met.  Previous to the last encounter, weapons have been several times drawn and threats made, but it was hoped that the difficulty had blown over until the two recent affrays showed the contrary to be the fact.